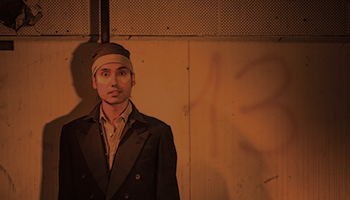 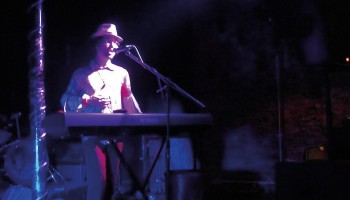 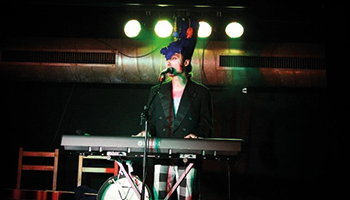 Alvin Devolder was born in Brussels from a Flemish father (Kortrijk) and a Philippino mother (Cagayan). He spends his childhood in Paris and follows music lessons at 5 years old, a time when he doesn’t understand French yet. When his family moves back to Belgium, he is 8,5 years old and begins piano at a music school (and gets his classical piano degree 9 years later). The same year, Alvin begins to compose and improvise at the piano. At 10, he writes his first songs and his first short stories.

At 15, Alvin dreams of becoming an actor, doing stage direction and scriptwriting. It’s also at this age that he performs his first compositions in public, in an American church that he attends with his parents, very open to have young people express their talents. However, as going to university is compulsary in the family, Alvin chooses to study Journalism since he knows those studies will enable him to write a lot and work with a camera. After graduating in Journalism, his interest for theater and cinema emerges freely again and he follows studies in Scriptwriting and Script analysis. A period that gives him the opportunity to finally do creative writing and to show his acting talent in short films.

From 1997 to 2005, Alvin sings and plays keyboard in his own band, combining with his other artistic activities (painting, dance, writing, voice-over, music for short-films…) and part-time office jobs. He gigs at la Fête de La Musique, the Amnesty International Festival, the FNAC of Antwerp, the Ward’in Rock Festival, at La Cambre, the Cultural Center of Schaerbeek, the Kultuurcafé….

In 2004, one of his songs is selected on a Belgian compilation of 10 Belgian bands, by Arker, a producer and artist who discovered Soldout the previous year. After that, Alvin collaborates with a couple of bands and also plays in Namur and Luxembourg.

In 2007, after a trip to New York, Alvin decides to stop all activities that prevent him from fully concentrating on his own music, and starts playing solo. In 2009, his passion for acting still being very strong, he writes a one man show that combines sketches and songs in French. He performs the show twice at the Festival Mars en Chansons.

Then, in 2010, Alvin decides to move to London, to try his luck. He joins his twin brother who had moved to London the year before, to follow a Master in Acting. During 4 intense years, Alvin plays on the acoustic London scene and experiments with a loop pedal. Thanks to interesting collaborations, he plays at the Camden Fringe Festival (writes and co-directs the show’s trailor), dances at the Art Licks Festival, writes and co-directs a music video for one of his songs (“Paper Boat”) and records an EP, “Clair-Obscur”. One of his songs reaches the public vote’s first place of a music competition on XFM, the famous London indie radio. But those 4 years are very tough mentally, as Alvin doesn’t stop changing jobs and moving house, worsened by his twin brother’s cancer in 2013.

They finally decide to move back to Brussels during Summer 2014. Alvin makes a promise to make all his dreams come true when he comes back to Brussels. 2015 is a turning point in his music style. During the Summer, Alvin learns how to use a music software and makes the arrangements of his new songs. He is happy to present his new EP: “7.83Hz” (7.83Hz is the frequency of the Earth). Even though his songs are still always very much piano lead, with vocal polyphonies and emotional melodies, electro and cinematic arrangements have been integrated. Alvin’s music can be described as a mix of pop, rock, electro, classical, film music, soul and triphop.

Furthermore, Alvin is happy to present the first music video he wrote, directed and edited for the song “Stratosphere”. Alvin found back the energy to do what he loves (contemporary dance, yoga, lyrical singing and choir, badminton, cross fit, Qi gong, reiki, …) while still working part-time and giving singing, piano and writing lessons. After those difficult but enriching years, Alvin is grateful for his health and wants to continue to create as much as he can and inspire.